The Stationary Engine – which was used as a power source on farms, in factories and mills, as a winding or pumping engine for sewage removal, for collieries and along canals, for winching purposes and no doubt many other uses most of us have forgotten about.

The other main use of steam engines was transport, where power was needed to propel vehicles along roads, across stretches of water, along rails, even to fly airplanes, but not much was to become of that owing to the weight and fuel needed for the fires, and not forgetting their agricultural uses to ease the workload of the average laborer.

On top of this, there are also different offerings in different countries, so, on this page, we shall show ones available in the U.S. and Canada and set them out into those categories, starting with what most people associate steam engines with – road haulage and agriculture.

A further page will be produced relating to Amazon.co.uk and it can be found here… 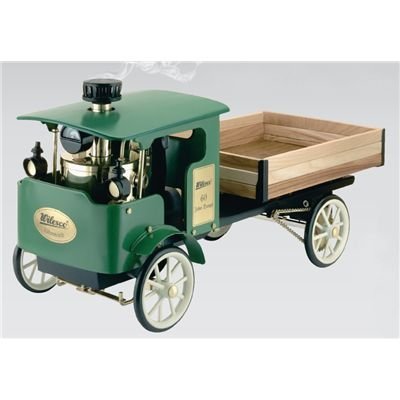 For our first one, this is a whopper compared to the usual steam engine models you’ve seen before.

This Wilesco D320 Steam Lorry is a large, realistic steam-powered lorry from yesteryear fitted with a fully functioning steam engine, is powered by dry fuel tablets and gives around 15 minutes of running per charge.

It comes complete with remote control steering and is a great option to have on an engine of this size – no more crawling around on your knees to change direction like Grandad had to do years ago when he got his first live steam model.

While this Ready Assembled Model Steam Engine or collectors model might look like a kid’s toy, it is not recommended for anyone under the age of 14 years unsupervised as it is very hot to the touch and live-steam and naked flames can easily cause problems in the wrong or inexperienced hands.

The best thing is, it has a solid brass boiler, flywheel, and drive chain with steel linkages and other parts for durabilty. Don’t get me wrong. It will last for years with a little care and attention.

On top of this, the basic model has lots of accessories available like a canvas cover for the load bed behind the cab, but sadly it is not offered in the US.

It is, however, available in the UK or directly from the manufacturer in Germany.

As far as the 200ml boiler goes, it has a site glass showing the water level to fill it to, which is topped up after removing the cap (providing it is cool) once it is below the correct level.

Also inside the cab is the double-acting steam cylinder and it is these moving parts that need a light oiling on a regular basis to ease friction and make sure little steam escapes from where the rods enters the cylinder.

Being around 19 x  8.5 x 10 inches (49 x 22 x 26cm) and 6.8lbs (3.1kg) in weight, you will see that this engine is no lightweight when compared to other Wilesco Steam Engine models, which tells you this is a substantial, worthwhile model.

It’s a great display piece that can easily be taken for a run around your yard, so whether you are a collector or a hobbyist, the Wilesco D302 is certainly worth considering purchasing as it is one of the best pieces Wilesco have so far produced.

One point, the advertisement page on Amazon.com is not up to much as it appears it has not been promoted on Amazon until recently, so there are no American buyers’ reviews showing, but it can be seen fully by clicking this green button, here.

In fact – just checked the UK version and it’s not much different. The language is German in the description and still no reviews shown.

A bit of shoddy advertising, to be truthful.

Shame, really, as it’s a great looking, well made and large model that’ll grace anyone’s collection or fill a kid’s face with glee as they explore an era of the past.

For UK readers, this same engine is available here

Sticking with the Wilesco theme, there are another 5 wheeled live steam models to choose from.

Again, from Wilesco, not much of a write-up with no reviews from the US, but the UK has one very happy customer with other pics shown.

This antiquated-looking fire engine uses the same solid fuel tablets to provide the heat to the boiler in the rear, with steam passing forward to the engine to drive the rear axle using chain-drive.

I can imagine steering this model would be a bit awkward!

The manufacturer’s measurements are the same, but the weight is 3.5kg (7.7lbs) which is a bit more like it judging by the dimensions.

Have to say, the very poor advertising is letting such well-engineered live steam engine sales down, big time.

Owing to the similar boiler sizes of these engines, you can expect run times of around 15 minutes and the flame dies down before the water is all used so they are easy to control from a safety point of view.

A bit of a posh title for a working steam engine??? Can you imagine the mud it was dragged through between farms?

Again, the Amazon site lets us down with their specifications, although with this quality-built engine there are plenty of images to see the fine styling of these early farm machines.

These Mobile Engines were originally pulled around the farms by cart horses where they would be set up for their day’s work, and this engine has the towing hitch and horses available as an extra, just to complete the picture of how life was, back in the days of yore, and for that reason there was no need for steering to be fitted. 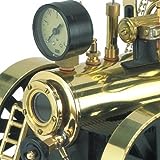 Its bright brass with black contrasting paintwork makes it a pleasure to behold. A masterpiece of model engineering.

There’s not too much write-up to give you an idea, but you can be sure you’ll get the very best standard of craftsmanship, like the rest of the Wilesco range.

It’s just a pity they don’t brush up on their marketing to match their excellent products.

Most of these Wilesco live-steam engines come with a few fuel tablets included, just to give eager buyers a chance to fire up these factory tested engines immediately, but more will be needed very soon; you can count on that!

Again – The UK product info is very lacking, but it can be found here and it goes under the name of Wilesco 430 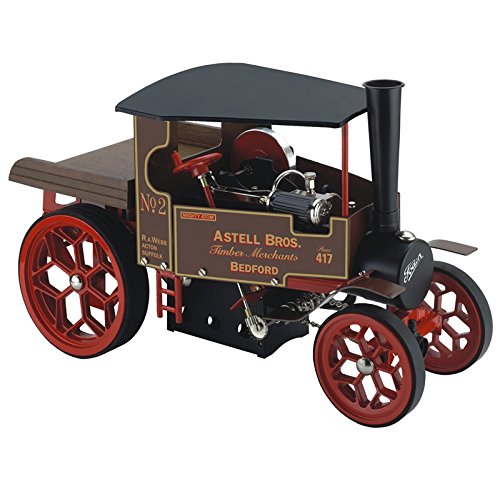 This lorry is based on the British Foden “MIGHTY ATOM” from Sandbach in Cheshire, UK, in the early 1930’s before they moved with the times to quicker gas engines (petrol for the Brits) and then onto the more efficient diesel power source, and the best of it is, Wilesco say it is true to the original design.

Again, Amazon is very lacking with details and gives incorrect information about weight and age usage, which is down as 3 years of age.

It uses their proven boiler of 230cc, so it gives a running time of around 15 minutes, which seems to be the norm for these larger Wilesco models, and obviously they are heated to match this time using the solid fuel tablets.

They are supplied with what they call “witab” fuel tablets, but the same product elsewhere goes under the name of Esbit Smokeless Fuel Tablets.

Being a semi-enclosed cab, this one may well be a bit awkward to control once it has set off, but there are adaptations to the steering on some of the following models.

Imagewise – what you see here is what you get regarding learning more from Amazon! 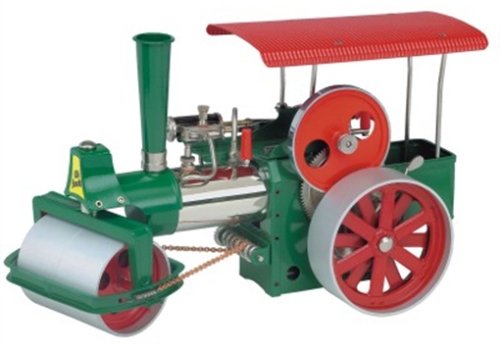 This steam roller is the least expensive live-steam wheeled engine produced by Wilesco, still with the same standards of everything else they manufacture. You’ll never fault them as they are tested before they are delivered to their customers.

And, WOWEE. Amazon.com have got it right for a change.

The British ads have far more detail – after all, they were the steam pioneers originally and that’s where Wilesco export to the most, so best check those out if you are interested in this Wilesco D365 steam roller. 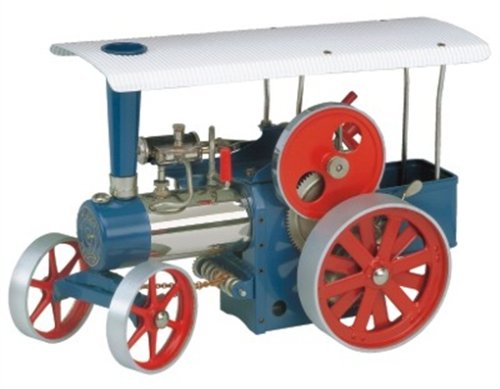 This fully operational engine is a replica of a traction engine of the 19th century.

It has the same basic boiler as the roller above, but there’s the added benefit of a chimney that smokes and with a clutch for the drive.

In contrast to the steam rollers, this traction engine has a long roof and two separate wheels fitted on the front axle – obviously.

It can also be upgraded with remote control for the steering (Z360) and tyres of different profiles for all wheels – but they are only available from Wilesco directly.

A better description of this live-steam engine and purchaser’s reviews can be seen on the UK version of Amazon, HERE.

And now, to upset our American readers, the following are available only from Amazon in the UK