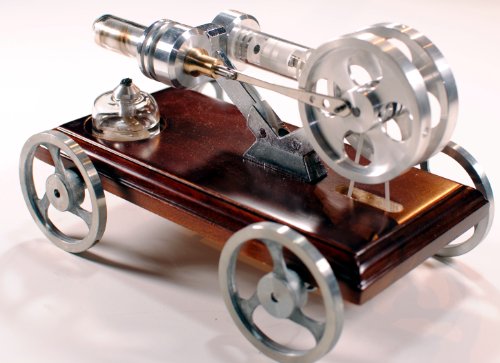 Our intention is to bring complete beginners into the world of model engineering with this Model Steam Engines for Beginners post, to plant a seed using model engines, to allow curious minds to develop and explore how things work and at the same time entice them into the fascinating world of engineering.

As can be seen with the above image, we also deal with hot air engines.

In this case, a Stirling Vehicle Engine is shown – being fueled by a small alcohol burner using a single wick, where one end of the engine is heated to expand the air within the sealed system and the other end is cooled naturally by the outside air, causing the engine to run by using what is known as the Stirling Cycle.

This, in turn, drives the vehicle along, although it is only a basic model with a single direction owing to the engine only rotating in one direction – no steering involved, but perhaps an enterprising youngster could add remote-control steering at a push?

It comes in at 8 x 4.7 x 4.5 inches and weighs 1.2lbs, so is a chunky little motor and will work diligently while there is fuel in the chamber and lasts for ages on one fill.

Many of these engines have been purchased according to Amazon’s Customer Reviews and are highly rated.

These engines are not exactly powerful, but the simplicity of having a single external flame making them run commands a great deal of attention and fascination as the engine speeds away on its own.

If you want to see more about this particular model, click this bar.

But, back to Steam Engines…

They come in all shapes and sizes, from minuscule live steam models that easily fit in the palm of your hand to huge railroad locomotives weighing several hundred tons, and as we’re trying to introduce people to models, we have to start in the smaller scales.

From this point of view, there are many varieties of engines to choose from.

Low-pressure steam engines being run by Esbit smokeless fuel tablets or gas – usually the smaller scales are tablet or spirit-fired, like the Mamod, Jensen or Wilesco engines, and going up the ladder using gas or forced-jet spirit firing again as the size increases, to more solid engines using wood, coal or coke granules which actually need a chimney to provide the airflow for the fire.

In fact, Dad produced a live steam Traction Engine he called PYRTE (stands for Pull You Round Traction Engine) a few years back and wrote how he did it so other budding engineers could easily follow the build.

He offered it as a relatively cheap Kindle download and also uses Amazon to provide a soft-backed printed version, both of which can be found here…

Being from the UK, Dad called it a traction engine, but in the US it would be called a steam tractor.

It is a relatively simple model to build, but if you have zero mechanical skills, then maybe it would be beyond you. Even so, many have been built in different places around the world, even by beginners.

Scalewise, it is around 1.5 inches to the foot (1/8th) at 26 inches long,  weighing around 50 – 60lbs when complete so it is not exactly a beginner’s first project.

As he’s said several times, it is not visually perfect, but others have used his book to produce far better-looking engines to suit their capabilities, leaving him a little embarrassed at his original ‘masterpiece’.

But Dad’s engine aside, we need to look at the smaller-scaled models as there is far less outlay should a person’s interest change.

If you want to check it out on this site, click here and you will be taken to most of Chapter 1 called ‘How To Build a Steam Engine’ where the silver soldering section is left out, but will be added in the next blog post.

Most of these models are factory made and can be purchased ready built. Some are even tested before they are delivered, but these tend to be produced by the larger factories.

The ones with odd-sounding names are usually produced abroad, so if any of those take your interest, make a point of checking  Amazon’s Customer Reviews by clicking on the accompanying picture or green box to make sure you are buying a proven model.

Other types of model in the smaller scale include Flame Lickers like the one above, using a flame again, sucking in the hot flame and then allowing it to collect inside the sealed cylinder, that way drawing the piston to the top of the cylinder as a vacuum is created above the piston within the cylinder itself as the air cools.

There are endless varieties on offer, some intricate, others using very a basic but pleasing design, and we shall show all the options available on one page to make life easier for you in the very near future if they take your interest.