For all you would-be machinists out there and experienced engineers as well, we have sourced many Free Plans for Model Steam Engines from around the internet.

Some are beyond the scope of novice builders, like fully complete locomotives that take years to construct.

Other simpler engines like wobblers (oscillating engines, whether steam or air-driven) can be done in a few weeks without too much trouble, although these are readily available in a completed working state from Amazon and many other sources.

If you are more into self-assembly or maybe you like smaller engines ready-made, just light the wick and go, then you may want to take a look at Grandpa’s Gizmos, where Grandpa Joe gives his verdict on small engines and kits he has, and will, purchase from around the world. He’ll explain the good and bad points, maybe help you decide if you want a particular model whether its steam, stirling, a flame-licker or gulper, or whatever he comes up with next.

However, as we’ve not built all of these engines below from plans, we cannot guarantee the plans or descriptions are complete.

The best bet is to download any pdf’s that take your interest and decide from there.

To make life easier; we have arranged them into different categories to help you choose your downloads – just click the blue links and you can then download your free pdf.

Quick Links to Categories Below:

The image below shows the type of steam engine meant by Beam Engines – for those who are unsure.

The early versions, where enormous power was needed for pumping purposes in mines, sewage systems and the likes, were built on a colossal scale.

The drawback initially was they relied on air pressure to force the piston down, so they had to be huge – 5-foot diameter pistons and more, along with strokes to match – with very poor seals because of poor manufacturing processes back then, meant steam had to be drawn into the cylinder at low pressure (boiler containment pressure problems back then were common with many boiler failures) and when the piston was highest, cold water was sprayed into the captured steam to condense it to water, causing a vacuum below the piston.

To create a sealed piston top, they would add either a metal or wooden top to the piston within the cylinder with a shallow layer of water above that to act as a seal. Possibly a thin layer of oil would have produced the same result as well as allowing the piston to move more freely?

Later versions, once boilers became more reliable and pressures were raised, meant steam pressure could be used to drive the piston, meaning smaller cylinders could be used and the motors could be sped up a little.

If you are looking for a ready to assemble kit in plastic to keep the kids happy and of a much simpler design, then you can’t go wrong with this type of model.

Not exactly authentic, but this very inexpensive, snap-together water pump in the guise of a model beam engine encourages kids to become more constructive and leads them on to explore the past, especially the steam era.

In the case of boat engines, you can easily use any model steam engine for a power source providing it is big enough for the hull and you can also get a boiler in there.

Many operators have to use remote-controlled servo-assisted rudder steering with these models for obvious reasons.

Oscillating engines, being lower in height, have the benefit of another safety measure, owing to the spring pressure holding the cylinder against the main block, allows the cylinder to lift away from the block to relieve any excess boiler pressure.

Also, if gas is used as a fuel, that can be regulated using a servo too.

Also, if you are not into building from plans  so much, take a look at Grandpa’s Gizmos to see what’s on offer as ready-to-run live-steam engine kits, especially for the boating community

This one is a 90-degree twin-cylinder model constructed of brass with everything brazed. It has its own cylinder lubrication system – one of the well-proven displacement lubricators used on smaller live-steam engines.

On top of this, a single servo can control steam flow and pressure to the engine as well as forward and rear direction.

You will see there is also a boiler ready built to suit this engine as shown above.

On top of these, although not free, we recommend Stan Bray’s ‘Model Marine Steam’ book (above – just click the picture or this green section) where you are taken through the construction of a model steam vessel from start to finish showing detailed plans of different steam engines used to drive boats, some simple, others complicated, along with hull construction and ancillary fittings…  Well worth a read if you are into building your own steam-driven watercraft.

Steam Engine Boiler from 2007 -drawings only

If you are looking for a small ready-built boiler, then take a look at this one called the Microcosm Micro Scale Steam Boiler 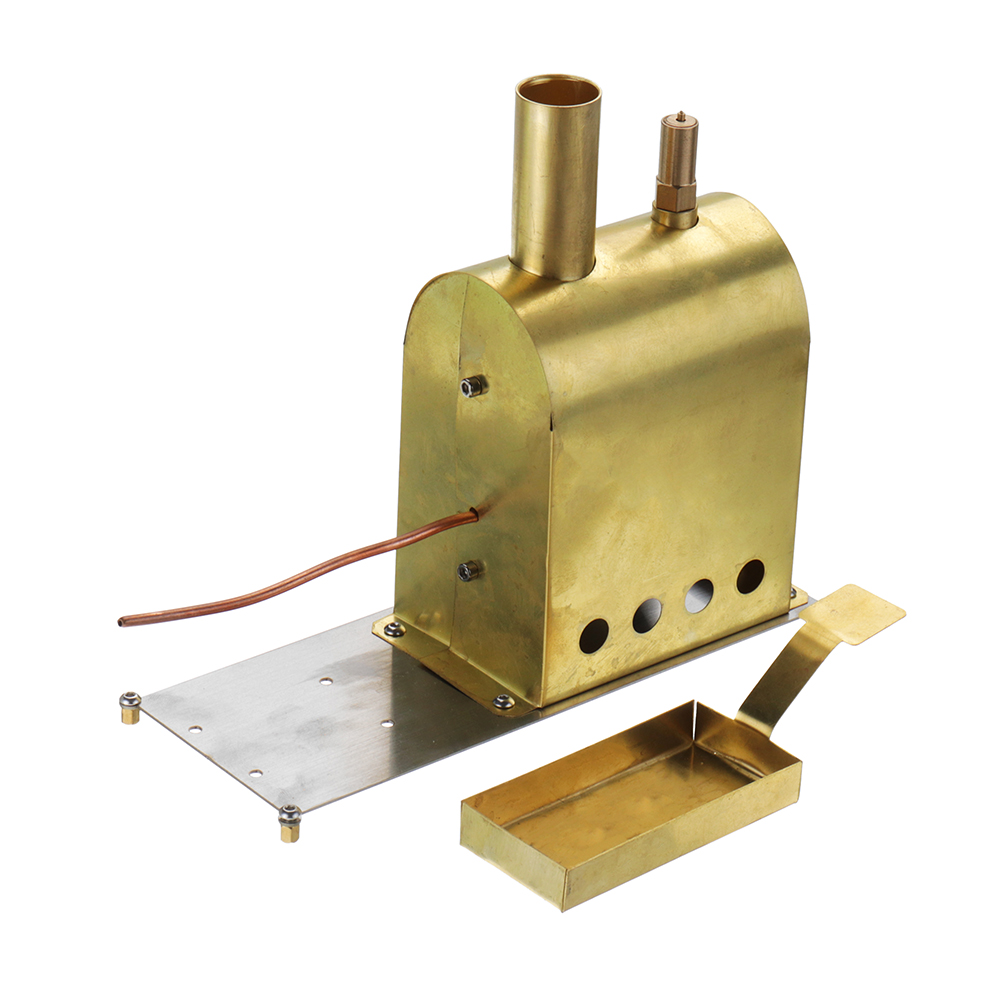 This is the same boiler shown above and can be purchased individually.

It is highly suitable for the low height, (suitable for boats) single-cylinder, all brass, self-assembly Microcosm Oscillating Live Steam Engine

Another option this boiler could be used to drive is a low height high speed turbine by the same company, Microcosm, obviously dependant on boiler pressure and capacity, but should be good for a 15 minute run with this boiler.

Hot Air and Stirling Engines run using a sealed system of air where one end is heated and the other cooled, either naturally or by being immersed in a liquid. Between these ends is a displacer piston to move the air around, pushing the cooler air to the hot end and the hotter air to the cooler end.

Sounds a bit complicated as this gif does not show exactly what is written, but by using two pistons, one the power piston and a second as a displacer piston, both linked to a crankshaft, this air movement can achieve rotation of a crank by using very little heat at the hot end.

do not produce a great deal of power unless they are scaled up considerably with great heat applied to the hot end, although they were used in the early days for trans-Atlantic shipping, using seawater for the cooling and coal for the necessary heating.

This diagram is very basic in that it does not show the air transferring from the cool end to the hot end, but as you will see, the cylinders need to be set at 90 degrees apart for this process to happen efficiently.

There are 4 variations on the principal of hot air engine building and design, some very simple and some extremely complicated, but the ones below are the simpler versions.

Live Steam Stirling — a bit of a difficult one, this.

For most of these loco’s, be prepared for the construction to take ages to complete, especially if you are manufacturing the parts yourself as many parts are so fiddly you’ll need a good magnifying glass.

However, many of these engines have castings available from different suppliers throughout the world, mainly in the UK.

JPDuval Steam Train  — A bit on the difficult side, this one, as are the remainder below.

How to Make a Toy Steam Engine – super easy

How to Make a Turbine Engine – medium easy

Not to be confused with Stirling Engines and sometimes known as flame lickers, these were the first type of steam engine available, where low-pressure steam was drawn into a cylinder, then allowed or forced to cool, meaning the piston would be drawn along the stroke by a vacuum before the cycle was repeated.

Present-day ones are much simpler and do away with having to stoke up and raise steam pressure in a boiler, but draw hot air directly from a flame into the cylinder which cools naturally and does exactly the same thing, although because the cooling is slower, they produce very little power.

Owing to the lack of speed regarding quick-cooling, these Vacuum Engines tend to rev relatively slowly, plus they also need a good-sized flywheel to continue the crankshaft momentum.

How about Building the Piston Valve Engine???

Below, we have an engine using 12-inch diameter flywheels, so you’ll need a larger lathe to turn these.

There… That should keep you out of mischief for a while…

More to come in the near future as we find them…

One thought on “Free Plans for Model Steam Engines”