OK, Let’s compare prices for the UK and the US between Amazon and Banggood.

I’ve chosen a couple of examples I’ve stumbled across to show how much we British have to pay extra for the same product. 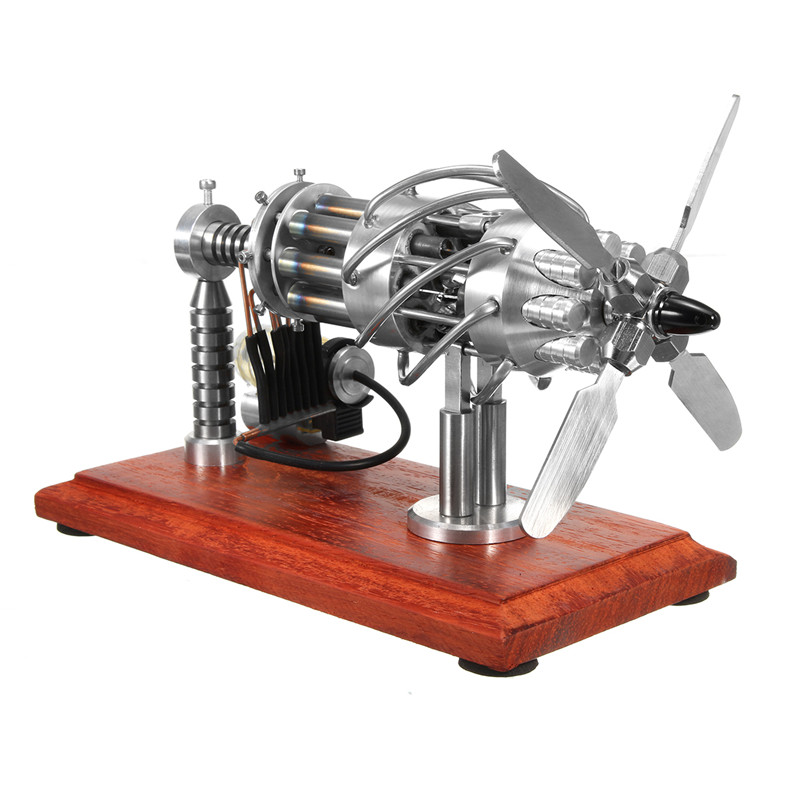 This example is a 16 cylinder stirling engine, they’re a bit of a passion of mine, exactly the same product in each case, but with a different name just to cause confusion, with a propeller installed up front, ready assembled and rearing to go once gas is added.

On Amazon.co.uk it is advertised – get ready for the shock and don’t try to pronounce it – as the deguojilvxingshe 16 Cylinder Stirling Engine Model Quartz Glass Hot Cylinder Engine Model Kit, with an estimated delivery time of 2 to 3 weeks and stinging your hand as you hand over your dosh to the value of around £250 (that’s roughly $350.00)

The same product on Amazon.com being sold by a different individual supplier (let’s read drop-shipper for that one) goes by the title of FenglinTech 16 Cylinder Hot Air Stirling Engine with a delivery time of around 5 or 6 weeks and Priced $298.19   (£215.41)

It has to be added here, that if we Brits buy it from Amazon.com, we will be redirected to co.uk and be expected to pay the extra anyway, or perhaps have extra added for Amazon’s postage.

Funny isn’t it, how we Brits get stung £35 quid extra because we are supposedly a rich nation?

A land of milk and honey they call it? Streets paved with gold and all that?

Who are they kidding, and can we all guess where these engines are coming from?

But let’s take a look at Banggood, China’s equivalent of Amazon, established in 2006 after Amazon was launched, after all, China are well known for copying businesses and products worldwide.

That same product advertised as STARPOWER 16 Cylinder Hot Air Stirling Engine Motor Model Creative Motor Engine Toy Engine with an estimated delivery time of 2 to 3 weeks comes in at £210.86 ( $292.00) delivered to your door.

That’s a £40 surcharge just for ordering this engine through Amazon.co.uk, and the best of it is it will come from China anyway.

Don’t get me wrong – there are some problems with such a small complicated engine. There are plenty of reviews on Banggood, but very few on either Amazon sites.

So I would not recommend you purchase one if you do not want a complicated model to keep running, but they do appear to sell reasonably well.

If you want to take a look, here are the links again to each one.

Amazon in the UK

Amazon in the USA

This is a model steam engine, a traction engine, comes in kit form and is supposedly 2.9kg and of metal construction, but how true this is I do not know – a glorified jigsaw puzzle, really, that requires self-assembly.

There are no videos showing how it is assembled and what scant informational instructions are not really worth looking at, but with someone with a bit of savvy regarding constructional machinery, it can be assembled in around four hours.

As you can see, it is not the largest steam engine in the world, but there’s a catch.

IT IS NOT A TRUE STEAM ENGINE. It is a construction kit to build an electrical toy traction engine.

It is driven by rechargeable lithium batteries and has sold on Banggood with builders’ comments shown.

The biggest problem appears to be the instructions, and secondly, the steering works back to front, but that little problem will perhaps be overcome in the not too distant future and hopefully, it will have remote control included.

And now, for comparison, for the same product directly from China (where it comes from through Amazon, but under a different name and offering the same delivery time and guarantees

But here’s a change for us…

Amazon.com advertise this same engine building kit as the DM34 Steam Engine Car Kit Mechanical Assembly Model Set and that comes in at near enough the same price of almost $660 (roughly £470) — again, another Amazon rip-off.

It’s no damned wonder they are such a profitable company when they double the price of many things.