You want to build your own Stirling engine using kits? And whether you call them Stirling Engines, Atmospheric Engines or Hot Air Engines, there’s not much difference.

Just to be awkward though, they have 4 different ways of working, but they are all on the same principle, some more efficient than others.

Air is heated at the hot end in a sealed system by an external heat source and pressure increases, pushing the upper power piston along its stroke.

This, in turn, rotates the crankshaft causing the lower and usually larger displacer piston to draw the air into the cooler end of the engine where its pressure decreases, which in turn sucks the pressure piston back along its stroke and turns the crankshaft causing the air to be forced to the top of the diagram, using the flywheel effect, to be heated once again and continue the motion.

They can be extremely complicated or very simple to produce according to air transfer, timing or sealing the passageways at the correct time, transfer passageway dimensions compared to heating and cooling cylinder dimensions, friction control – in fact, a whole host of other considerations.

But that does not need to concern you. 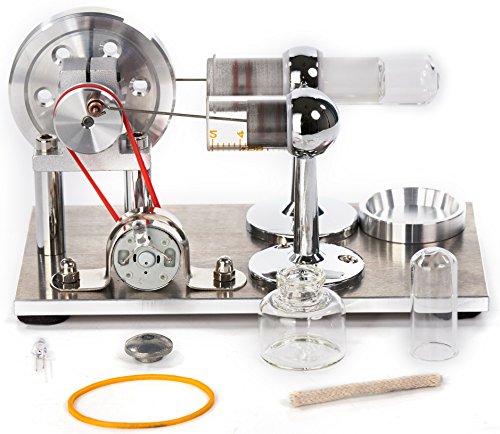 Check out  Grandpa’s Gizmos on our site for the construction details of this model as well as many others to come to show you what to watch out for when you build it yourself, showing little niggles inexperienced builders need to keep an eye on.

First thought up and produced by a Frenchman around 1700, these engines have had lots of time to be tinkered with, modified, improved upon, especially during the late 1800’s by a frugal Scotsman called Stirling, as a safer and more economical power source compared to steam engines with their very explosive boilers in their very early days.

Check it out on Wikipedia.

They died a death in the early 20th century, owing to their very low power output, unless extreme temperature differences were used, but the steam engine won hands down with power production compared to production costs once boiler safety was really taken into account.

So, at present, they have been resurrected, mainly as working models, as beguiling desktop toys and the likes, where they provide a great deal of fascination at how the engine works, especially using such a small power source as the palm of your hand or the heat from a cup of tea or coffee.

Not only that, but they are fully working models that can easily entice youngsters with a mechanical bent to develop into world-beating engineers.

In fact, low temp Stirling Engine kits are for sale around the world.

So, getting down to the nitty-gritty, you want to build your own Stirling engine and you fancy doing it with kits?

If you are into model engineering, then they are a great challenge to build one from scratch, but luckily ready-made ‘build your own Stirling engine kits’ are available, mostly manufactured in the Far East, where labor is cheaper, where these kits come ready machined and require assembly by the purchaser.

We have some shown on our Stirling Engine Kits For Sale page HERE, and the best of it is, they do not cost an arm and a leg, despite the intricate work involved in their production. In fact, the first one shown costs no more than a couple of cups of coffee and takes around half an hour to build and have running on your work-top.

Size-wise, they are not large by any stretch of the imagination and obviously do not provide a great deal of power, but many have a small generator driven by the engine, which provides colorful LED’s to show they are acting as a power source when heat is supplied to the hot end of the engine.

Usually, they run on a small container of alcohol, containing a wick, and this is enough to run these engines for some time.

They obviously need to be lubricated using very light oil as friction is the biggest drain on power from such a small heat input, and again, kids need to be supervised when handling these Stirling engines as they can get a bit hot owing to the naked flame being used.